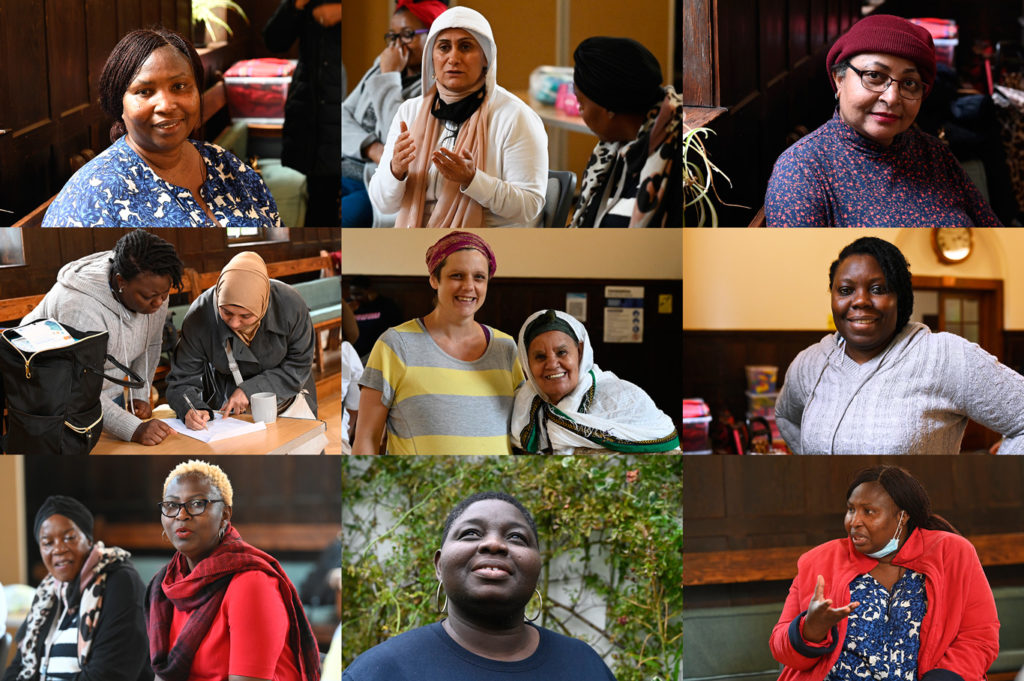 Women with Hope came out of Hope Projects, a Birmingham charity set up to relieve destitution amongst asylum seekers and refugees. In 2013 Hope Projects established a knitting group for destitute women asylum seekers living in the accommodation it provided. It was then known as Hope Women’s group. Over subsequent years the group extended both in its activities and in the immigration status of the women who wanted to attend. This resulted in the development of a larger group which includes refugee women and other women within the UK asylum process. It also resulted in an extended range of activities, thus taking the group out of the remit of Hope Projects and creating the need for a separate charity. Women with Hope, the new charity was formally inaugurated on 20 February 2019 and became a registered charity in October 2019

2019 was a busy year as well as a turbulent year. Busy because of the work involved in inaugurating and registering the group as a charity and all of the activities attendant upon those processes. Turbulent because of the very real risk we faced in maintaining the group whilst seeking a new place to meet. Historically the group met at one of the Hope Projects houses, but when that became no longer appropriate we started our long journey to our current home at Selly Oak Quaker Meeting House. In the period in between we have met at five different locations and we are now enjoying one of our longest periods of stability of location for some time.

Throughout the turbulence the group has stayed together and new women have joined. Activities have expanded well beyond knitting. Though we still sometimes knit, we also engage in many other activities, including learning and developing our knowledge of the immigration processes and systems through workshops led by experts and engaging in campaigns which promote our objectives, for examples such as the Lift the Ban campaign regarding right to work. On the recreational side we have enjoyed sessions with many volunteers on baking, singing, dancing and listening to and writing poetry. In addition, we have been fortunate in enjoying the expertise of Birmingham Women’s Aid and Birmingham MIND to facilitate our learning and understanding of the many health issues that affect female asylum seekers. Workshops have been held on such topics as FGM, Domestic Violence and Depression to give just a few examples.

In August thirty women and five children were hosted to a picnic in Lichfield by Lichfield Hope Support Group and other local supporters. This took place on what was probably the wettest day in August so the term ‘picnic’ needs to be interpreted broadly. Nevertheless, a good time was had by all.

Members of Women with Hope have also been closely involved in contributing to Women for Refugee Women’s research on destitution resulting in its new report, “Will I ever be safe?” – Asylum seeking women made destitute in the UK, launched in February 2020. In facilitating the report Women with Hope hosted a number of consultation and discussion workshops and in addition a number of women were individually interviewed.

Niger Delta oil spillages have a devastating human impact. Women with Hope, a small Birmingham charity for women caught up in the UK immigration system includes within its purposes the provision of a safe space in which women can relax, learn and reflect. A wealth of evidence testifies to the

I am from Ivory Coast, in West Africa, but my nationality is not important. Immigrants or asylum seekers can be Syrian, Iranian, Somalian, American or English. An asylum seeker is just a human being who has had to flee their own country to avoid persecution, war, all sorts of difficult

Listen to the group singing as part of the opening ceremony of the Women for Refugee Women conference  on 14 February 2020.